White Fish Is Everywhere You Travel. Here’s What It Really Is and Why You Should Order It. (2022)

White fish: It sounds boring. Bland. It’s the overlooked cousin of rich tuna and oily salmon. It’s true that the flavor of white fish — Atlantic cod, haddock, hake, halibut, flounder, and sole to name a few — is mild, the flesh colorless and dry. No matter where you travel, you’re likely to encounter white fish on the menu (whether or not the type of white fish is listed is another matter). Case in point: It’s the basis for the beloved fish and chips.

White fish come in two varieties. There are round ones, like cod and sea bass, which look like your garden variety fish, and flat, which has a much stranger look. Flat fish, like halibut, flounder, and sole, are what they sound like: a flat-shaped fish with eyes on one side of the head that swim sideways and hunt on the ocean floor, usually by hiding in the sand. Though flat fish aren’t exactly glamorous creatures, they are longtime inhabitants of both the restaurant and the home kitchen.

These are the five most popular white fish you’ll see when traveling and wandering the grocery store aisles. 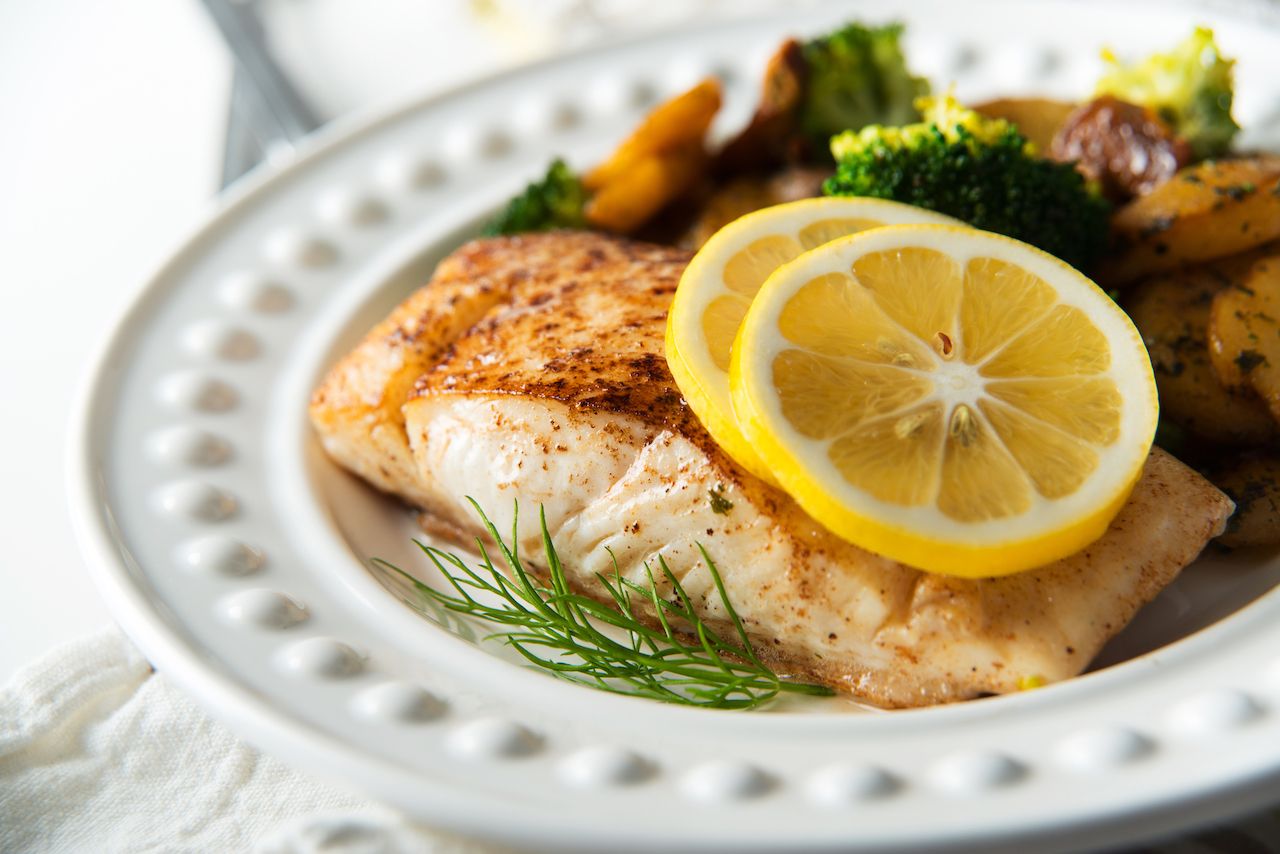 Halibut is ubiquitous on restaurant menus. It’s the oiliest of the white fish, meaning its flesh is infused with super healthy omega-3 fatty acids, and it’s protein packed, too. Most Pacific halibut reside in Alaskan waters, but can also be from around Southern California and off the coasts of Japan and Russia. Atlantic halibut, which can be found in the waters near Canada and Greenland, is severely endangered and rarely commercially fished, though it sometimes accidentally picked up as bycatch. Any halibut that you see in the grocery store is of the Pacific variety.

Halibut frequently appears in the mythology of the indigenous peoples of the Pacific Northwest as a sign of prosperity. Today, halibut is still enjoyed throughout the continent: It’s the perfect canvas for fresh, crisp, herbaceous flavors like lemon, tarragon, coriander, fennel, and rosemary, and the filets are typically pan seared or grilled.

Halibut is also centerpiece of Norwegian culture. This famous seafaring society renowned for its fishermen is sometimes called the “kingdom of the halibut.” The premier place to fish for halibut in Norway is Havøysund, where halibut sometimes grow to as many as 170 pounds. Championship halibut fishing contests are sometimes held in Havøysund, but Nordic halibut are a vulnerable species and Norway is a leader in creating viable varieties of farmed halibut.

There are more measures underway to protect halibut. Just this year, the United States and Canada agreed on catch limits for wild halibut to help maintain the survival of the species. However, fish are so central to the diet, culture, and economy of North America’s indigneous peoples that in Canada, their right to fish according to their own laws is constitutionally protected. 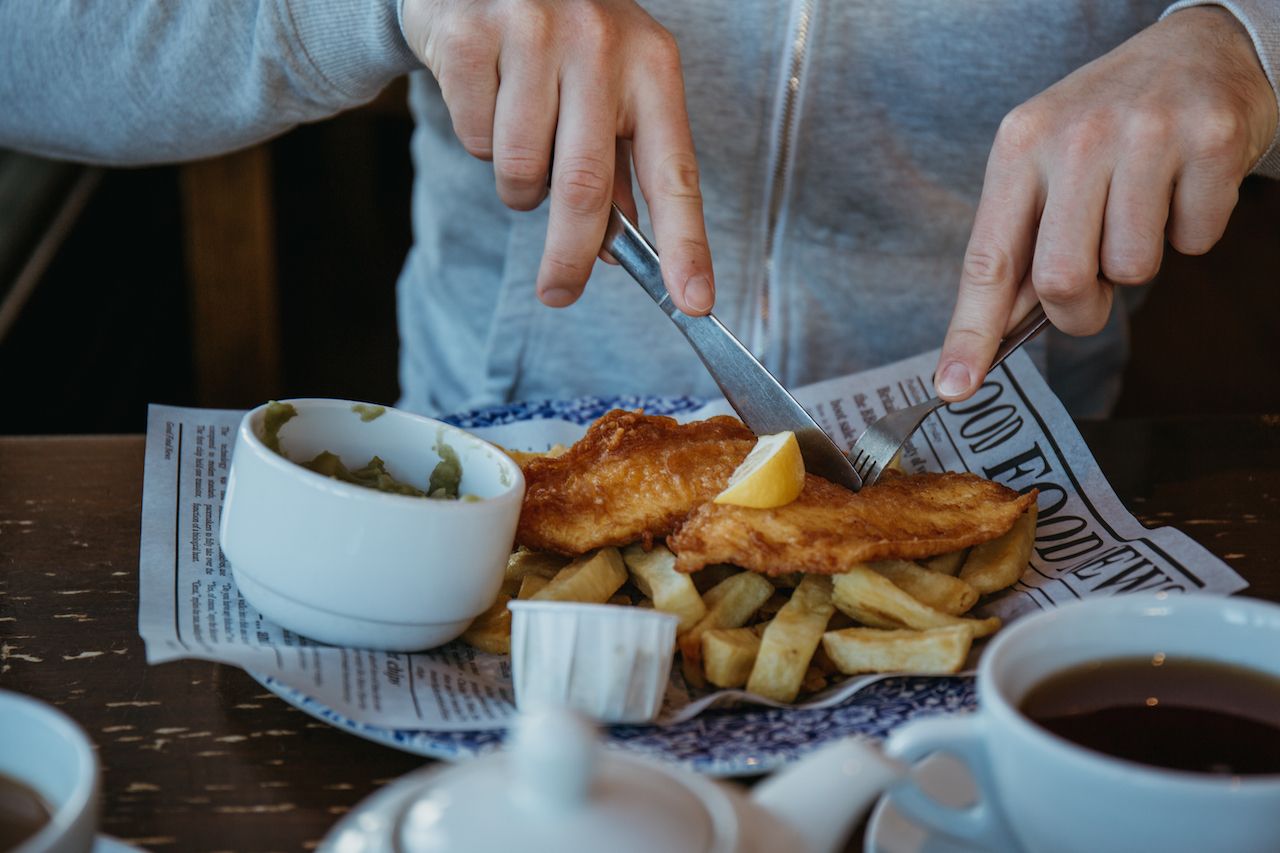 Cod, while rich in protein, is slightly drier than halibut, though it does contain the antioxidant selenium. Health benefits aside, cod is one of the most sustainable seafood options. Cod stocks are in no danger of being overfished because they are managed by a system that limits catch size. Pacific cod mostly come from the Bering Sea and Gulf of Alaska, while Atlantic cod can be found all the way from Greenland, to North Carolina, to the Gulf of Maine.

Cod truly provides worldwide sustenance. It’s a central element of the cuisine in the oceanside Netherlands, both in a popular street snack called kibbeling (chunks of battered and fried cod) and lekkerbekje, deep fried filets of cod — essentially the Dutch version of fish and chips.

The seafaring Scandavian people of Sweden, Norway, and Finland favor lutefisk: cod dried on open air racks, soaked in lye and cold water for about two weeks until it achieves a gelatinous texture, and then served steamed. It’s especially popular during the Christmas season.

The United Kingdom is the third largest importer of cod in the world in order to supply its fish and chips obsession. In fact, white fish is the most widely consumed fish in the country (a similar white fish called haddock is sometimes substituted for cod).

The appeal of cod might be in its versatility. It can be served in chunks in a creamy chowder, roasted alongside vegetables, seared, poached, or fried into fish sticks. 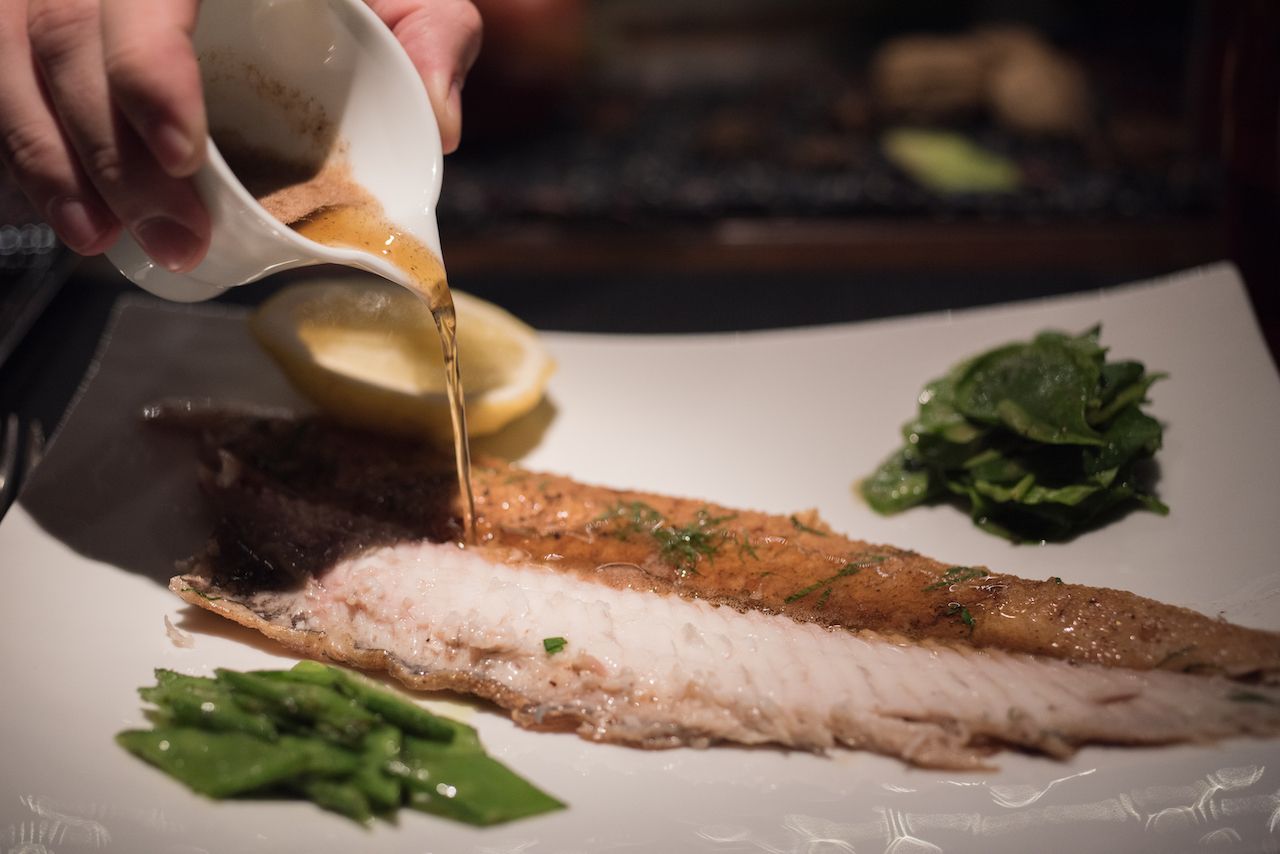 Though there are many types of sole, Dover is the most common, widely available, and most highly prized. You won’t find it in American waters; it resides mostly in the Mediterranean and the North Sea, making it a staple of European cuisine in particular. It takes its name from the English seaport that raked in the most sole in 19th century.

Dover sole may look like a humble flatfish, with its spotty, drab brown skin, but it’s sometimes called “royalty” among fish — and the menu prices reflect that. It might be worth the price to seafood connoisseurs: Dover sole doesn’t taste or smell “fishy” once it’s cooked, and the flavor holds up so well on its own that most recipes recommend cooking it as simply as you can without too many overpowering herbs. In North America, you’ll typically find Dover sole on restaurant menus imported from England, though some specialty grocery stores will carry it for about $30 per pound.

Though hard to capture exactly how Dover sole tastes if you haven’t tried it, the flavor is often described as delicate, both mild and sweet, with a firm flesh that holds heavy sauces well. Dover sole is easy to filet, and the flesh doesn’t flake or fall apart when its stuffed — another reason it’s in high favor among chefs.

Julia Child loved Dover sole. According to The New York Times, the simple recipe for sole meunière, pan-fried sole flavored with butter, lemon, and parsley, made her “fall in love with French cuisine.” 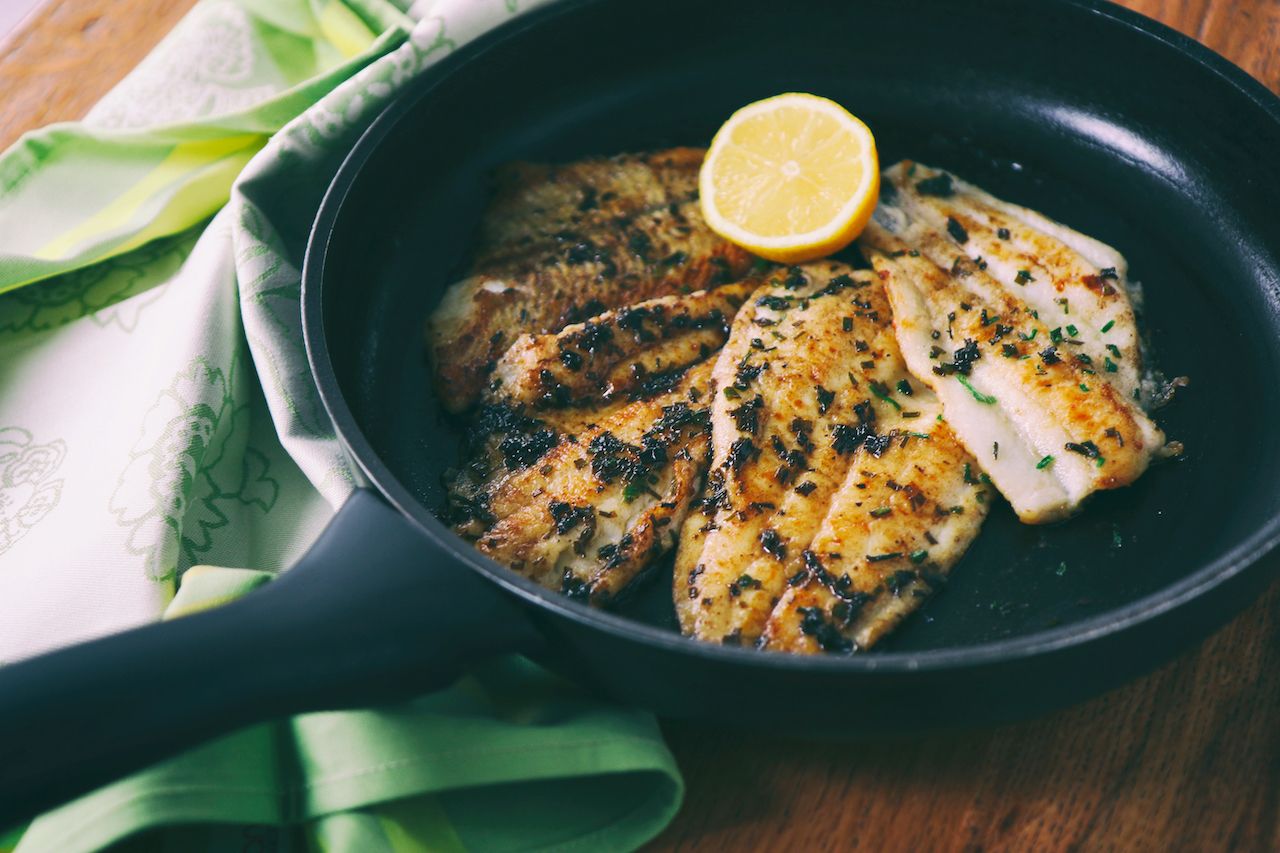 See Also
What Is The Best Choke To Use For Dove Hunting?Serpent Dove pdf downloadJustice store closings: 600-plus locations to shutter as part of Ascena Retail Group bankruptcy. See the list

Flounder reside all over the northern Atlantic and Pacific oceans. The popular yellowtail flounder is a native of the Atlantic coast. The summer flounder, also known as fluke, can also be found on the East Coast of the US, from North Carolina to Massachusetts. Though sole and flounder are often grouped together, especially outside Europe, they are actually different fish.

Flounder is also a staple food in Asia, where it’s consumed in Japan, Korea, and China. In Japan, flounder and fluke are popular as sashimi, while in China flounder is served whole or filleted, and either steamed or fried, and seasoned with ginger and garlic. In Korea, breaded and pan-fried white fish is called saeng sun jun, typically prepared using flounder, cod, or sometimes another white fish called hake.

You can find frozen flounder filets at just about every grocery store in America, but be wary: Flounder, like many other members of the white fish family, have a delicate flavor and flaky flesh that typically needs a little boost in the flavor department.

You can go the tried-and-true route and bake it with lemon juice, garlic, and a generous quantity of salt, or crusted in parmesan and panko crumbs. A simple pan sear accompanied by tarragon and cayenne is a slightly more adventurous way to dress up this humble fish. 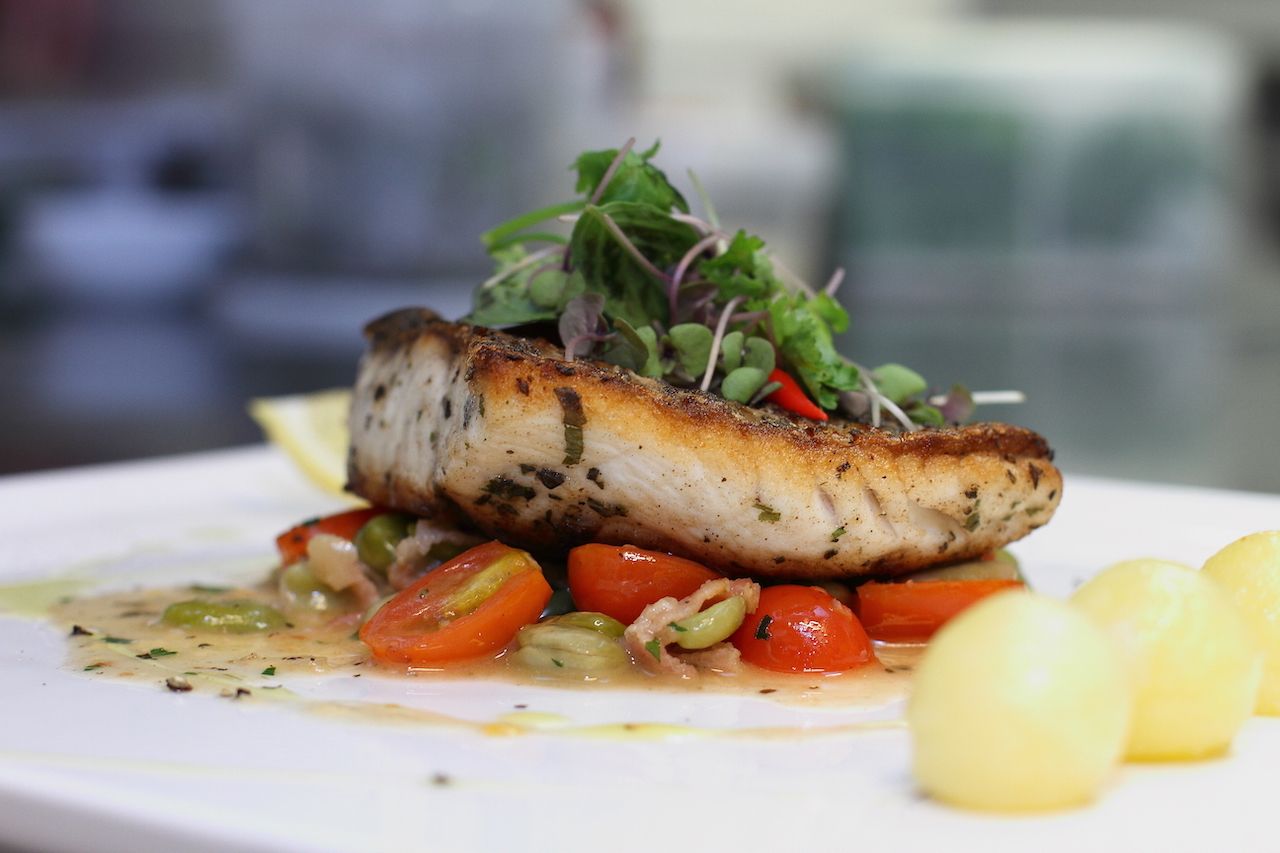 Sea bass are native to western Atlantic waters between Florida and Cape Cod. North American sea bass, sometimes also known as black sea bass (so named for the color of its scales) is a sustainable fish as its stocks are not in danger of being overfished.

Bass can also be found off the southern and western coasts of Europe, but where you won’t find sea bass is in Chile. Chilean sea bass, though you may have seen it pop up on the occasional restaurant menu, is a misnomer — this fish is actually an unrelated species called Patagonian toothfish.

Black sea bass is small fish with mild-flavored flesh, so it tends to be served whole. Sea bass is considered good eating; its meat is sometimes described as both tender and moist, suitable for grilling, frying, and baking. Like most other white fish, sea bass pairs well with the pungent flavors of garlic, tangy lemon, and salty capers. The skin, when fried to a crisp, is also a tasty treat.

Sea bass is also a popular ingredient in Chinese cooking. In Cantonese cuisine, sea bass is steamed in a bamboo steamer (though it can be done on the stove) with a variety of seasonings, including ginger, shallots, scallions, and soy sauce.

Jones day salary above the law

On 'Take It Like a Man,' Amanda Shires takes aim for the heavens

Noita from idea to execution in a dozen years (and counting)

Things That Are  Orange - THINGS THAT ARE

Things That Are Orange

Introduction: My name is Fr. Dewey Fisher, I am a powerful, open, faithful, combative, spotless, faithful, fair person who loves writing and wants to share my knowledge and understanding with you.

​
We notice you're using an ad blocker

Without advertising income, we can't keep making this site awesome for you.